What Everyone Can Learn from Derek Jeter 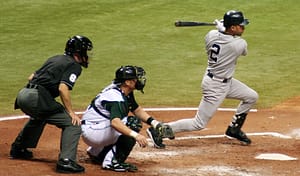 Derek Jeter is one of the most well-known sports athletes of all time. Synonymous with winning and leadership, Jeter has all the tools one would want in an athlete. In fact, by the time he retired in 2014, Derek Jeter was the only sports figure listed on Fortune’s 2014 list of The World’s 50 Greatest Leaders.

With the upcoming documentary on the life and career of Derek Jeter coming out this summer, we thought it would be helpful to analyze Jeter’s personal and professional traits to recognize what made him so great and perhaps allow us to put those traits to work on our own businesses.

It may seem odd to compare athletes to other professions, however, the traits for success are universal. Learning humility is one of the most difficult traits for anyone. Jeter did it with absolute class. He never allowed his ego to get the best of him. He attributed his success to others and when things went poorly, he took personal responsibility. Letting go of pride is difficult for anyone. However, it is an essential part of success and working with a team. Leaving our egos at the door, so to speak, allows us to concentrate on providing excellent service to clients and putting them first before our own agenda.

“Eighty percent of success is showing up,” says American film director Woody Allen. Jeter displayed this in the most literal sense possible, for example, only 3 times in his 20-year career did Jeter play fewer than 148 games of a 162-game season. He was both a star player and a leader displaying a tireless work ethic focused on his craft along with the willingness to do the right thing day in and day out. He proved his humility with class outside the world of baseball as well. In the largest media market in the world- New York City, Jeter managed to avoid bad press and maintain his good reputation.

Another characteristic that Derek Jeter possesses in abundance is his ability to perform in the spotlight. He handled the pressure of a high-profile career while performing at a stellar level. He withstood the pressure of fame, celebrity and notoriety and came out a diamond on the diamond. He won 5 World Series titles, and in ten post-season series, he batted over .400.

All that withstanding, Derek Jeter ended his last at bat at Yankee stadium with a walk-off game winning RBI single. As Guice Smith says, “A truly successful person sees it all the way to the end.” Meaning you don’t rest on your laurels just because you know this season in life, business or career is over. Go out with a bang, or a crack of the bat as Jeter did.

At GS&A, “seeing it all the way to the end” is a major league concern of ours when it comes to delivering the best service possible. Just like Jeter we show up, always do our best, and do not buckle under pressure. While our stage is different than a baseball diamond, our desire to excel is no different. We know these past few years have been challenging and the pressure to find your stellar employee can be a daunting task. Leave the stress to us, and we will take the lead as Jeter did.

Leadership style is something that GS&A has analyzed quite thoroughly in past articles about great leaders like Winston Churchill, Cornelius Vanderbilt and Walter Payton.

Derek Jeter was much like Cornelius Vanderbilt in that he is a mix of a few leadership styles:

If there are just a few words to sum up Derek Jeter’s character, we believe them to be humility, diligence and class, traits of a great leader.