Would you choose Walter Payton to be your headhunter today? 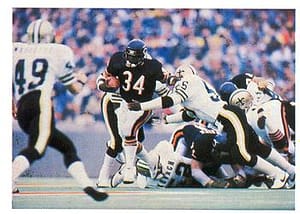 In our recent articles, at GS&A we have delved into the traits of various leaders within different industries and time periods. We have examined politicians, businesspeople, and military leaders whose prominent traits such as credibility, integrity, and courage have led them to success in their chosen fields.

Discover what kind of headhunter Cornelius Vanderbilt would be

We draw specific similarities in executive recruiting between these renowned figures’ character traits and GS&A. A prime example of these similarities would be found in the competitive nature of a professional athlete. Let us consider Walter Payton, NFL Hall of Fame running back for the Chicago Bears. Here are some reasons to imagine him as your choice of a headhunter…

Walter Payton will always be remembered for his results on the field. His accomplishments off the field, however, were even more impactful.

In his youth, Payton’s father instilled a strong ethical foundation within him. Payton prioritized giving his all in everything he did. “My father told me when I was young that it was your responsibility, once you’ve had some success, to reach back and bring someone with you,” Payton said. Walter Payton was foremost an ethical, respectable man.

Ethics are of utmost importance in executive recruiting. A client wants an executive recruiting firm that places value in maintaining a respectable image and reputation. They want to know they are placing their trust in the right hands. A headhunter who has a strong ethical foundation will understand the current work landscape and conduct themselves accordingly.

Selfless and service-directed also describes Walter Payton. For example, he filled in for a shift for one of the Bear’s customer service representatives so she could spend time with her family. Payton proved his charitability through time spent with local underprivileged children.

Positivity and diligence are the last two traits we choose to attribute to Walter Payton. In the face of the most difficult adversity, he maintained his dignity. In February of 1999, Payton revealed he had a rare autoimmune liver disease. Unfortunately, a new liver would not save him, and he was told he would die. He still filmed a PSA promoting the organ donor list he himself had been removed from three days earlier. He remained positive and eager to be diligent in his daily efforts to serve others.

Diligence, eagerness and positivity, traits Payton exemplified even to his death, are also inherent traits of a good headhunter. Any executive recruiting firm worth doing business with will follow diligently practiced and true steps that have proven themselves time and again as well as showing the eagerness to learn new methods.

Positivity in meeting challenges on an executive search mirror the positive attitude a professional athlete must carry onto the field or court to know they will have a successful outcome before the game even begins to work toward that result.

Payton’s legacy continues through his children and with their support of the annual “Walter Payton NFL Man of the Year Award.” This accolade  presented by the NFL honors a player’s volunteer and charity work, as well as his excellence on the field. The award signifies Walter Payton’s belief that anyone can make a difference.

At GS&A, we seek to learn from great athletes like Walter Payton to better serve our clients. We aspire to leave a positive, lasting impression on our clients as Walter Payton has done in the sports world through his diligence, positivity, and commitment. We help you make informed decisions for your career or for your company. We strive towards being the best headhunters and the best executive search firm in Nashville, in Tennessee, the U.S., and the world.